Crystal trees stem from various myths and legends from ancient times. The most commonly quoted of these stems from Ancient China where it was believed that a fairy named Shang Ziyie travelled to earth met and fell in love with Choo Wen Lui who came from a small village.  They married, but had very little money.  The fairy created a magic tree which "grew" money.  This provided the couple and other villagers with just enough money to survive.  This is where the modern day thoughts of displaying crystal trees in homes and places of business to encourage a steady profit and financial support.

In general, the ancient cultures believed that trees were symbols of power, wisdom, fertility and life knowledge.  With their roots deep in Mother Earth and their branches reaching skywards, trees were (and in some cultures still are) considered as a link to the universe.

In Norse mythology, an Ash tree, known as Yggdrasil was believed to be the Axis of the world, and the Norse God Odin was reputed to have hung himself upside down in it for 9 days and nights to gain the knowledge of the runes which could lead to his own immortality and rejuvenation.

In Germany and Scandinavia, there is a tradition of planting a guardian or lucky tree beside new houses to which offerings were made and at special festivals times ale was poured over its roots.  These trees were usually either Yew - for long life or apple for provision of food.

The Ancient Egyptians believed that sacred trees and water were needed together to provide for those in the underworld while Buddha is believed to have sat under a Bodhi Tree when he gained enlightenment.

In India trees are symbolised as patience and tolerance which dedicated their lives to the welfare of others.  God, in some cultures, is believed to be the source of all life and is depicted as the root of the tree, the trunk and branches represent the earlier communities which grew up with a pure spirituality close to the creator, whilst the leaves are human beings.

Trees, especially deciduous ones, are often referred to as symbols of fertility because of their annual renewal of life.

In parts of the Middle East, solitary trees at a spring may be decorated with red cloths, by barren women with the intention that this helps them to become pregnant.

In India, newly married couples traditionally plant two sacred trees together, side by side, one male and the other female.  These are enclosed and protected.  It is believed that if the trees survive and fruit, so will the couple's relationship and their fertility status.

Sometimes crystal trees are referred to as "Wish Trees". The belief is that wishes written down on a piece of paper which is then tossed towards the tree and ruffle the branches, will be granted.  Another belief is that wishes can be asked for in thoughts, then a deep breath is taken in and breath out over the tree with the wish still firmly planted in the thoughts.  This gives the action of breathing life into the tree, its branches and leaves - the tree should be given a little shake every day until the wish has been granted. A wish tree placed in the financial corner of a house is believed to increase financial wealth - the financial corner is the farthest on the left when you stand with your back to the front door of your house.

Hence there is a lot of mythology attached to the meanings behind Crystal Trees. 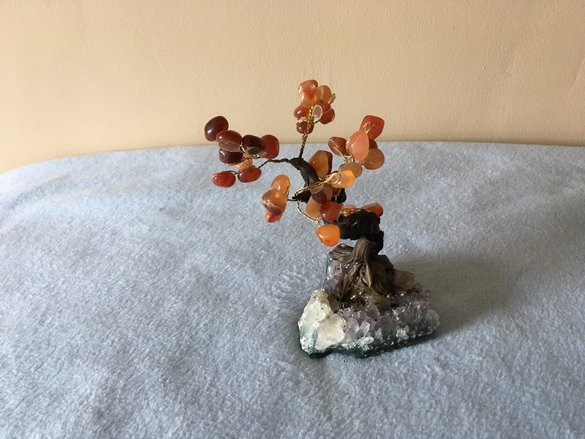